A Brief History of the Marching Drum

Said to be the first ever musical instrument since the days when a caveman beat a hollow tree-trunk with a stick, the drum has a remarkable place in history. Nowadays, there are many different types of drum in terms of size, shape, sound and purpose.

For centuries, drums have seen use on the battlefield and it is one of these types of war drum, ie. the side drum, that the following chronological log relates to. In particular this concentrates on the application of such drums when played in unison with other instruments, especially the bagpipe, ie, military, Scottish and Irish marching bands and other forms of traditional Gaelic and Celtic music.

Wooden or brass shelled rope tension drums were used historically to beat out orders of battle, punishment and even execution. It is from this military arena that the first drums were ever played in unison with the bagpipe. It is reported that it was at the battle of Waterloo, upon hearing the bagpipes of an approaching highland regiment, drummers of the Cheshire Regiment started to tap out the beat of the march. If this report is to be believed, it was at this juncture that the modern pipe band has its foundation.

The account which follows in the rest of this section has been provided by Drum Major Allan Chatto of Australia and is reproduced here with his kind permission.

Up until 1931 all pipe bands the world over played on “Rope Tension” drums. Some of these snare drums had metal shells but mostly the shells were of wood. The snare, or side drum, usually had eight to twelve gut snares fitted to the snare or bottom head. 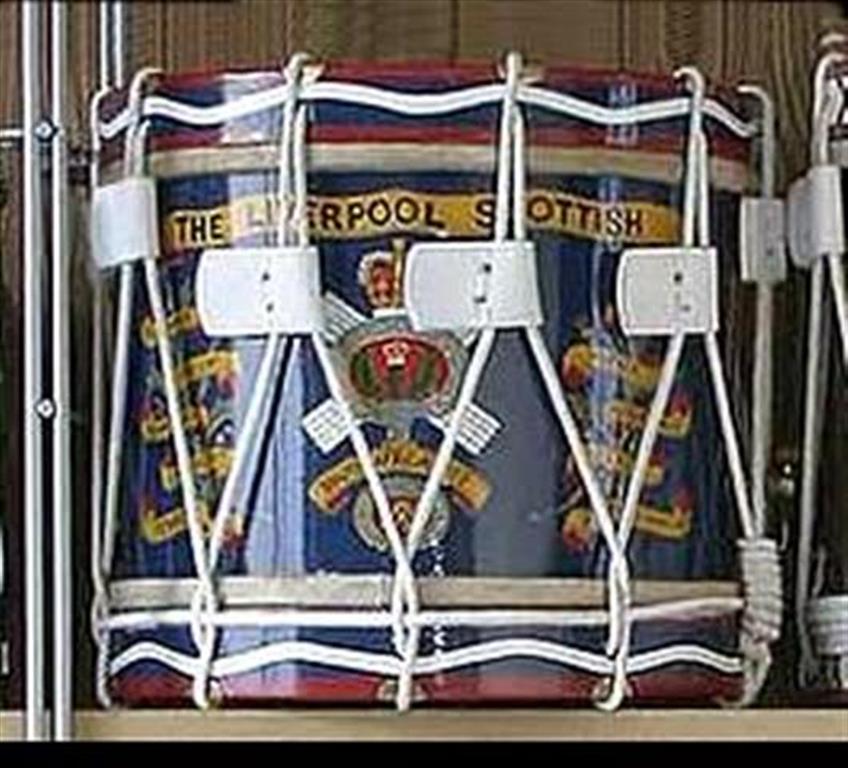 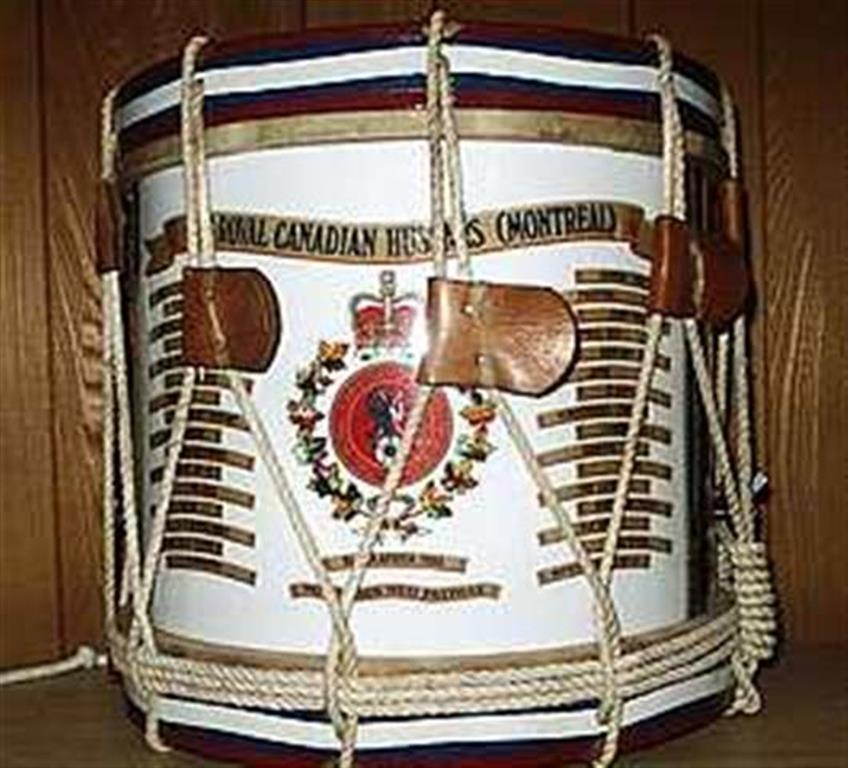 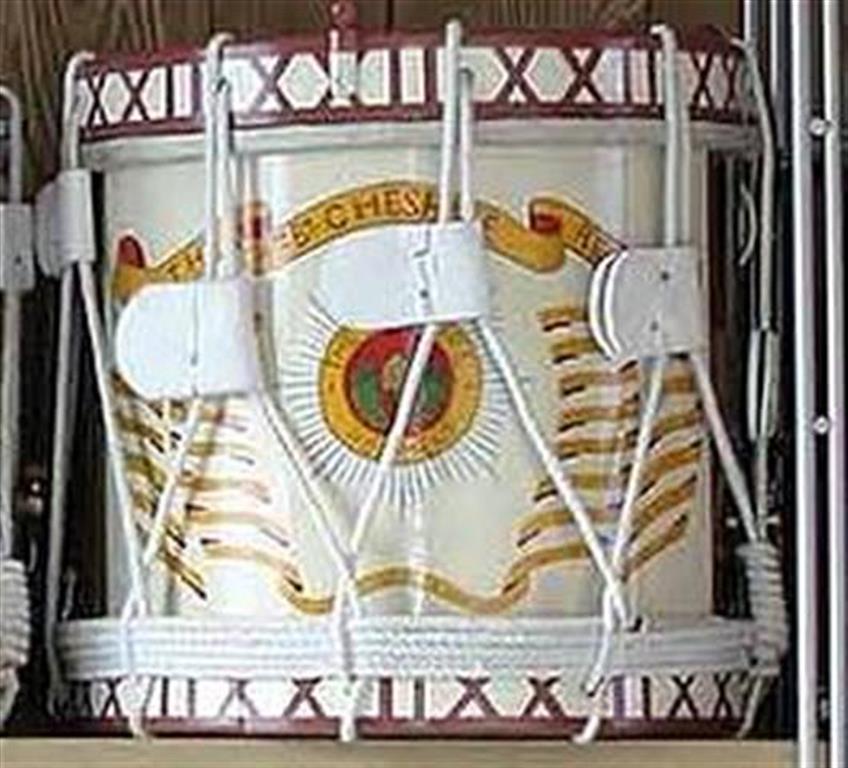 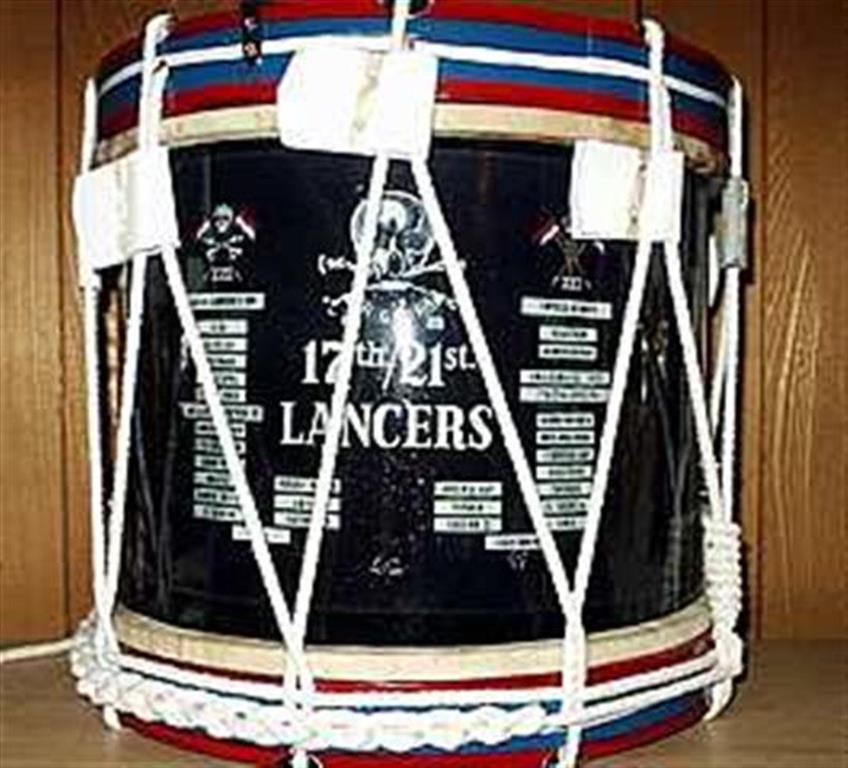 The first rod tension drums were introduced by the Premier Drum Company of England to pipe bands in 1932. They were first played at the Cowal Games by Dalziel Highland Pipe Band, Scotland, led by Drum Major Jimmy Catherwood. The drum corps won the World Drumming Championships playing a full set of these new Premier snare, tenor and bass drums. At that time the snare drum was only fitted with bottom snares. The drums had a wooden shell with eight tension rods and metal counter hoops though a wooden counter hoop was introduced for some military bands.

After the 1939/45 war the Premier Drum Company, with the assistance and advice of Drum Major Gordon Jelly of Dalziel Highland Pipe Band and other leading drummers, developed a new style of pipe band drum called “The Royal Scot”. The first models were only fitted with bottom snares but in the early 1950’s the internal top snare was introduced. At that time Premier were producing wooden-shelled pipe band rod tension drums.

At the end of the 1940’s the London based company of John Dallas and Sons Ltd, (who made television cabinets) manufactured the “Carlton Gaelic” range of pipe band drums. These became very popular and were to win many World Pipe Band and Solo Drumming Championships over the next decade. It had a great snare drum sound and permitted much faster beating within the snare drum scores. 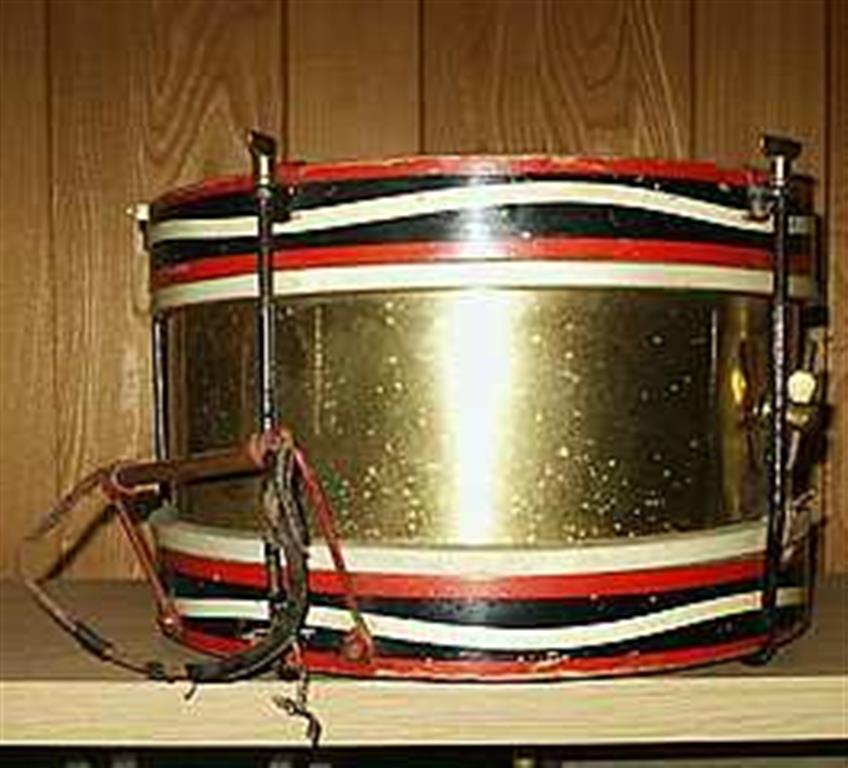 From memory the first Royal Scot came out about 1947/48 with bottom snares only. I bought mine in 1948. Then Carlton came out with dual snares, I think, about 1950. Premier brought out the dual snare Scot about the same time. At the time Carlton became the most popular drum.

During this era calf drum-head vellums were universally used. However a company in Blackpool, England, came up with the “Rudiment Nylon” drum-head for the snare drum. This was made from a waterproof Nylon material. Bands could sound well in all weather conditions. Eventually Premier and John Dallas also produced this type of nylon drum-head. 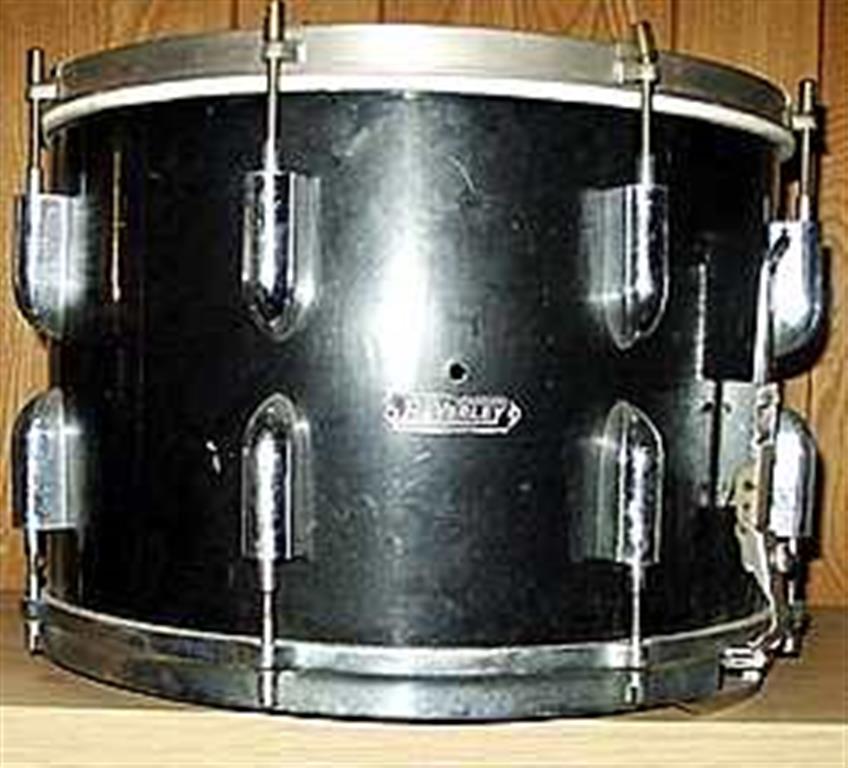 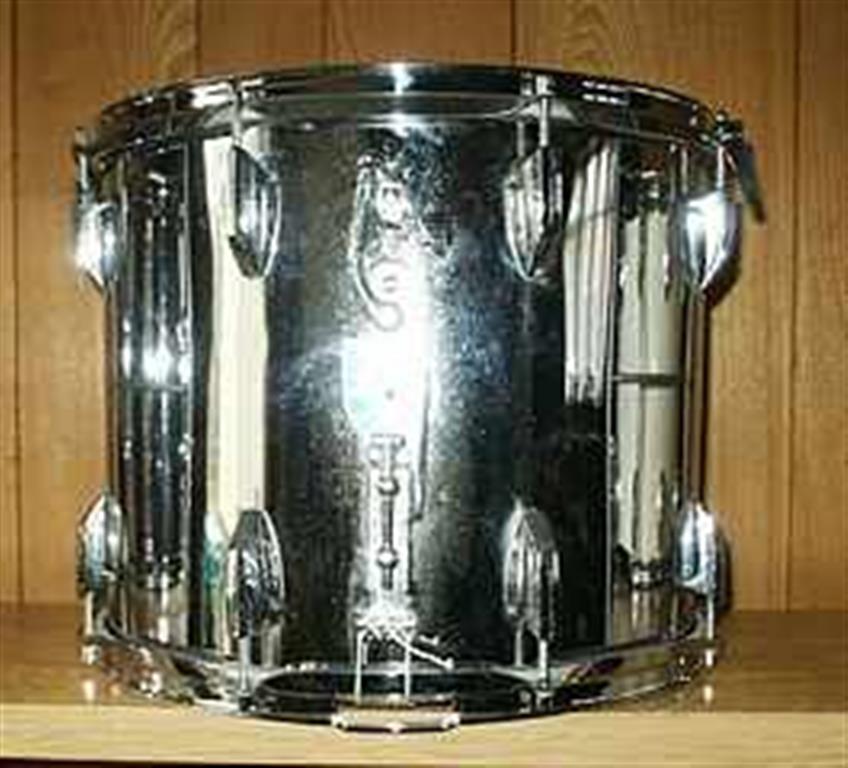 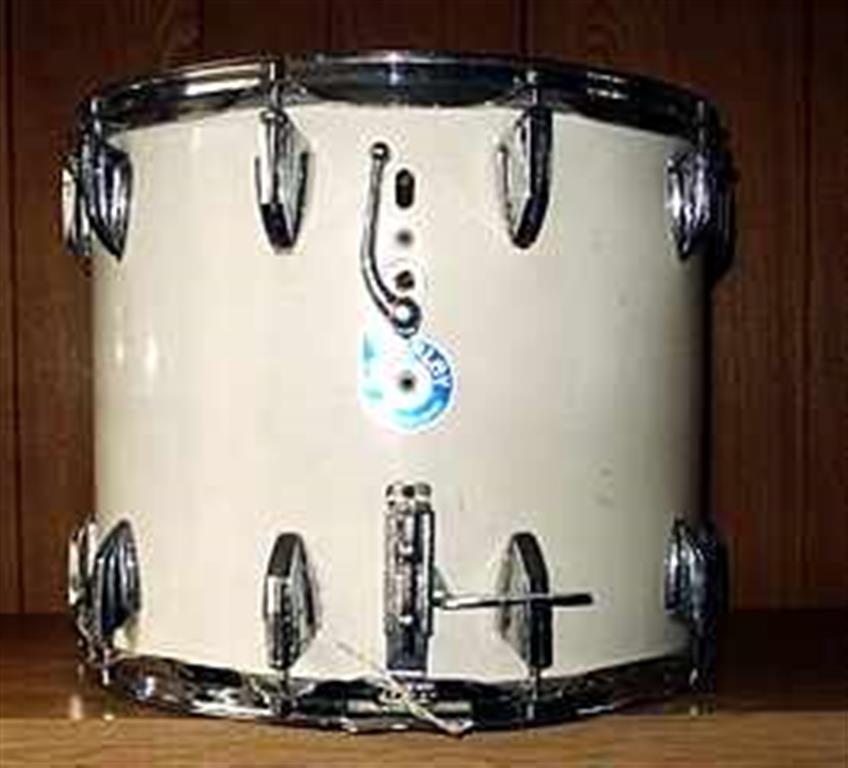 In the early 1960’s the English Drum Company of Rose Morris became involved in the manufacturer of pipe band drums. By the mid-60’s bands playing the Rose Morris “Clansman” drums were winning major Championships in the UK, North America and Australia.

With the introduction of the US-developed plastic drum-heads there was a change in drum sound which, in time, bands accepted. All these makes of drums were capable of producing a good sound for pipe bands but quite a few failed through over-tensioning the heads and failing to adjust the snares correctly. This still happens today. 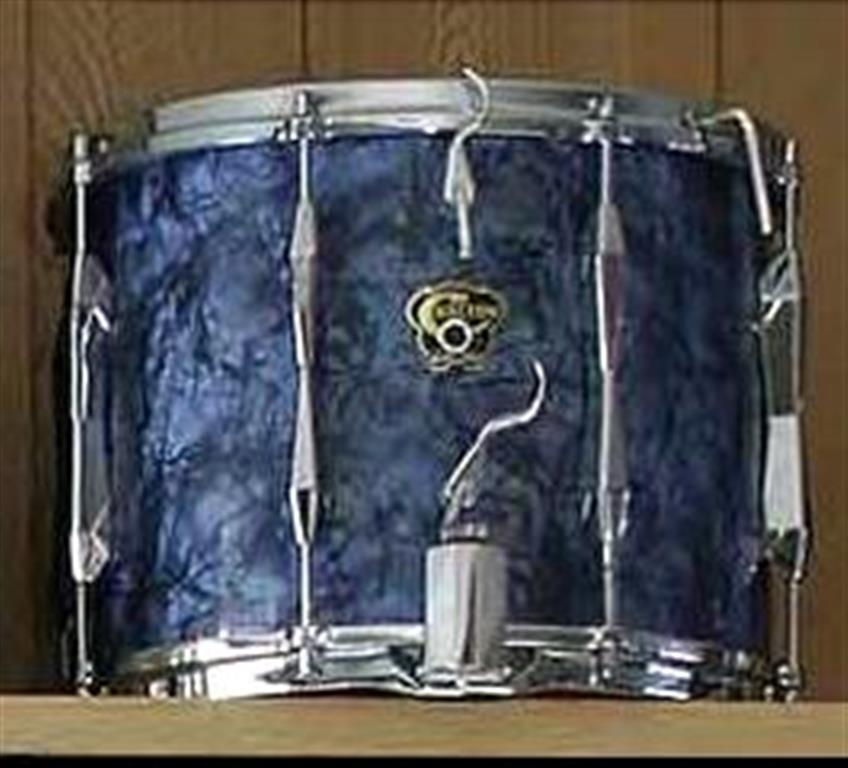 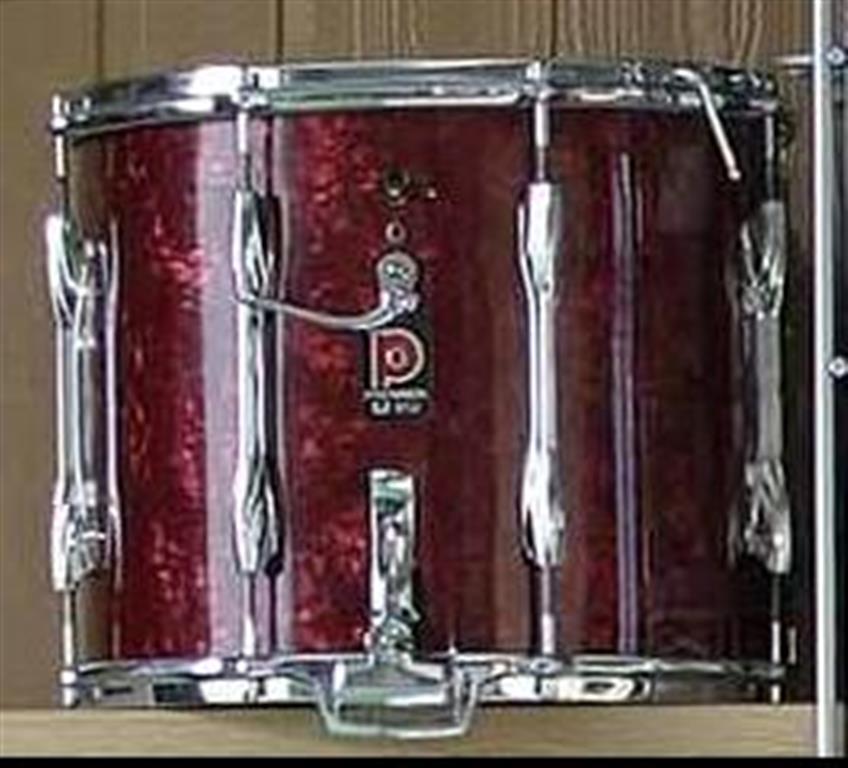 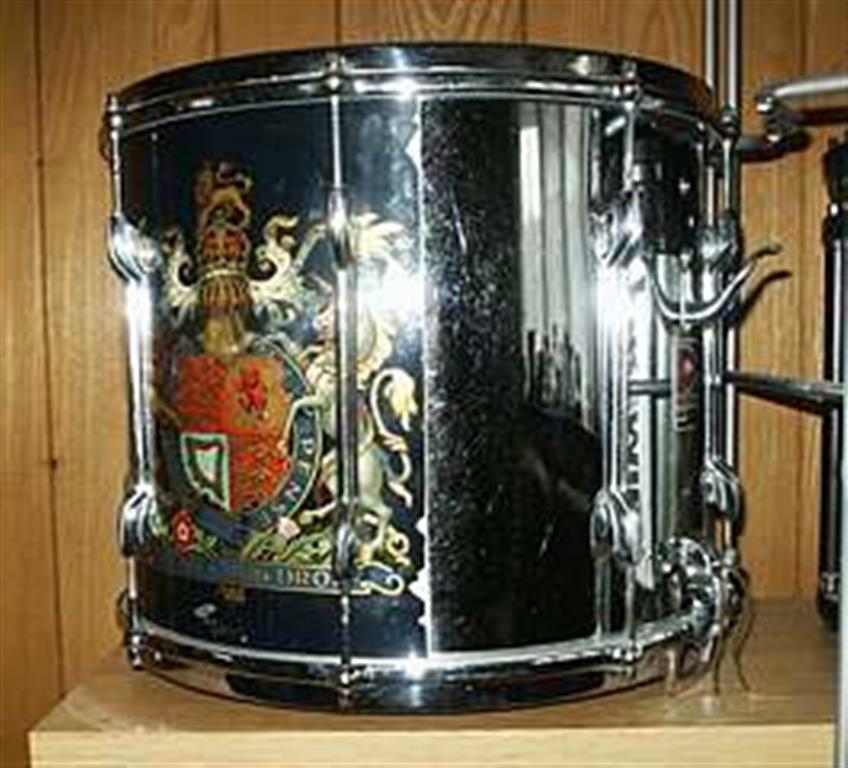 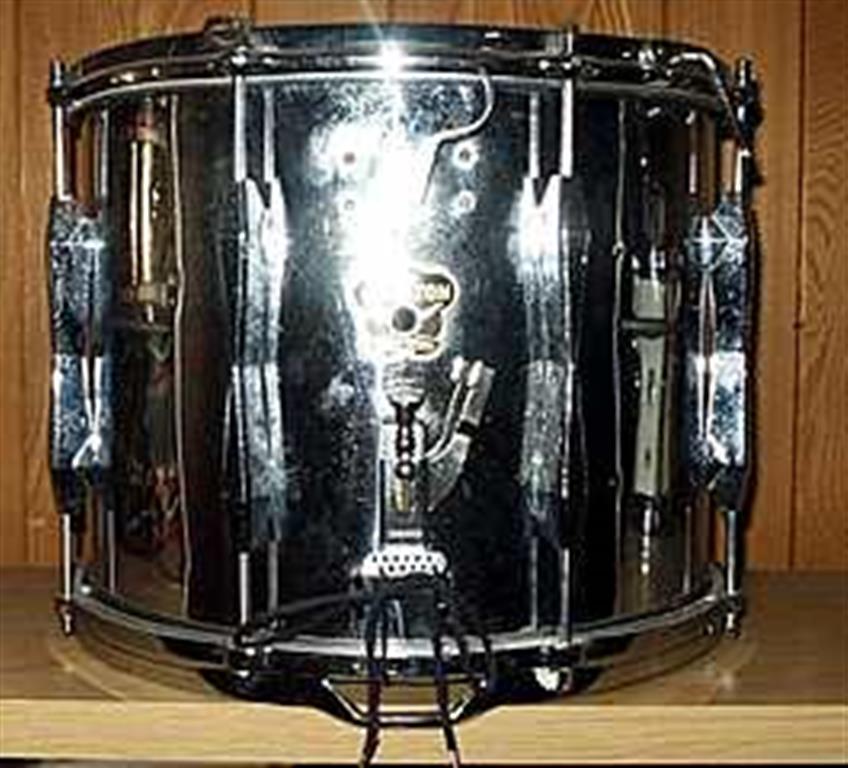 In the early 1980’s the space age KEVLAR snare drum head was introduced to Scottish Pipe Bands by a manufacturer in USA. It was soon found that it was possible to put much greater tension on a drum head. Something had to give and many drums, particularly Premier, were soon breaking tension rods and shells. The Legato Drum Company of Melbourne, Australia, can be credited with the introduction of the “banjo” system of snare drum construction whereby the head is tensioned on an independent top or bottom ring. The two rings were then fitted to a wooden or plastic shell. This was introduced with the Legato “K Series” of pipe band drums. 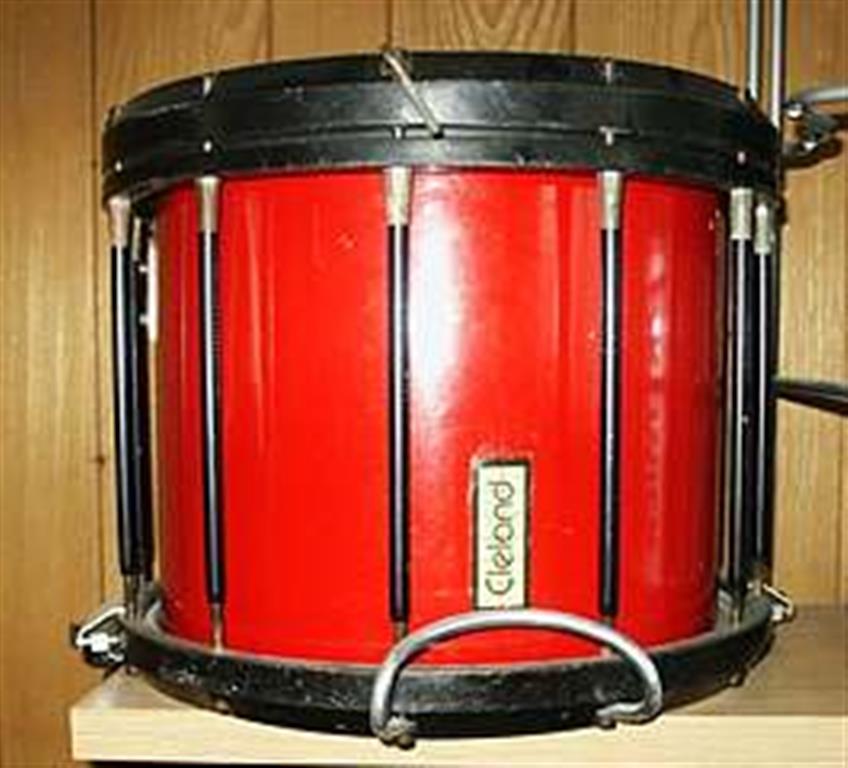 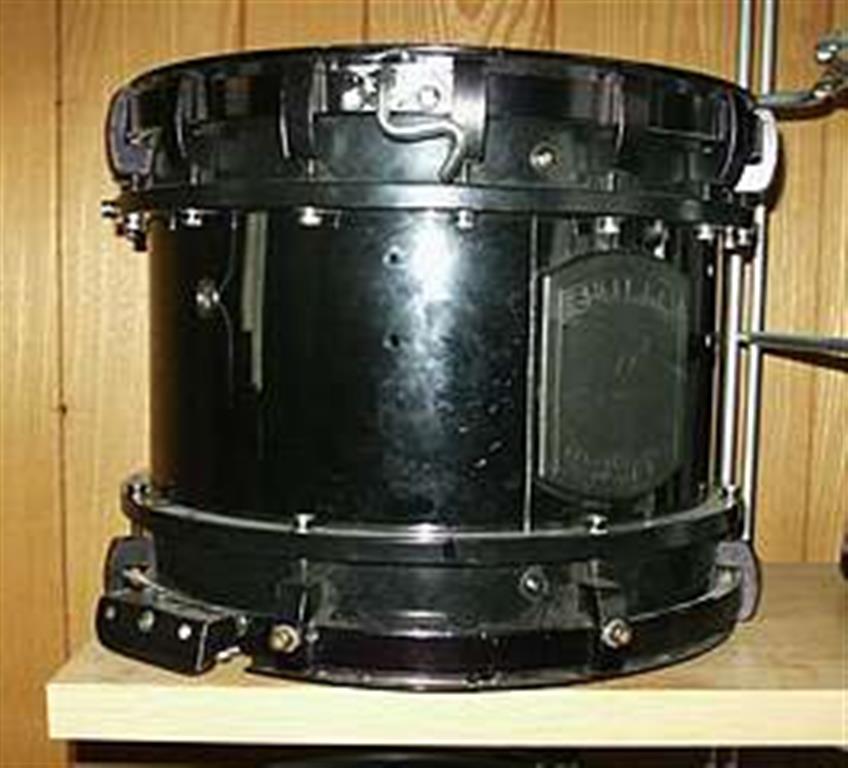 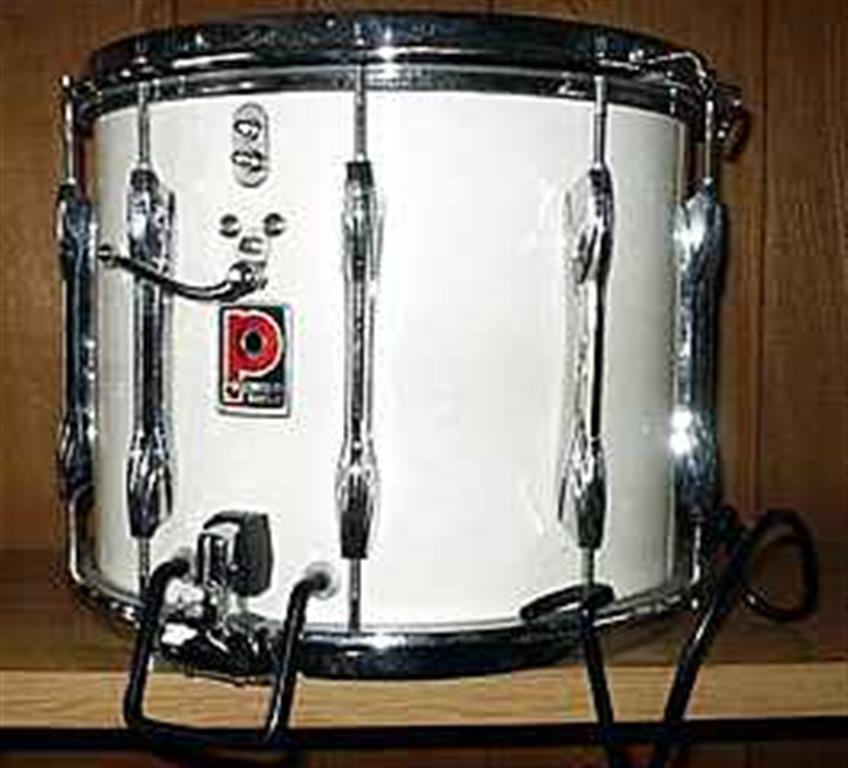 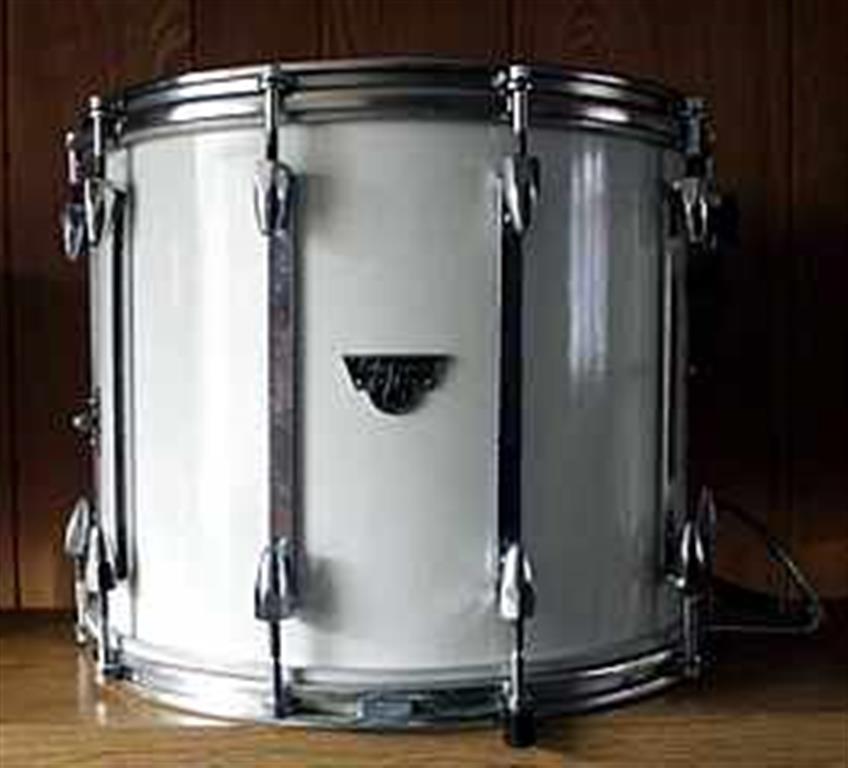 Other UK drum manufacturers were soon to follow. However other problems were to follow where the drum became far too heavy for young drummers to carry on long marches. This was addressed by drum design changes and nowadays drums are much lighter and easier to carry. Also, many drum corps use the USA designed “Drum Harness” which spreads the drum weight more evenly over the player’s body. Today the Kevlar or similar material drum heads are universal. Though the drum sound has changed dramatically over the last 30 years, followers of pipe bands now accept this modern sound. 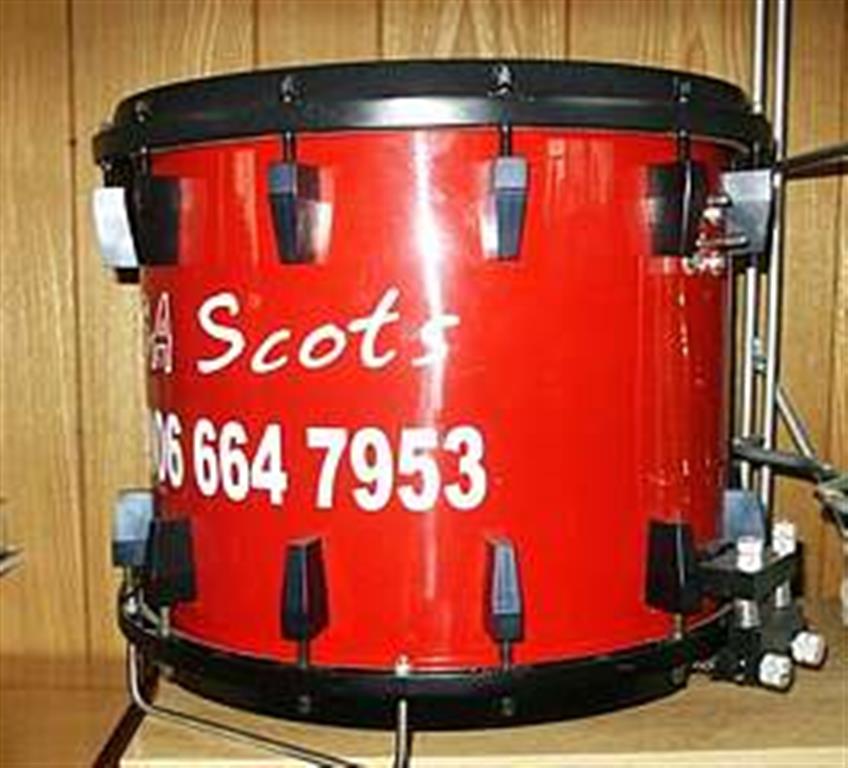 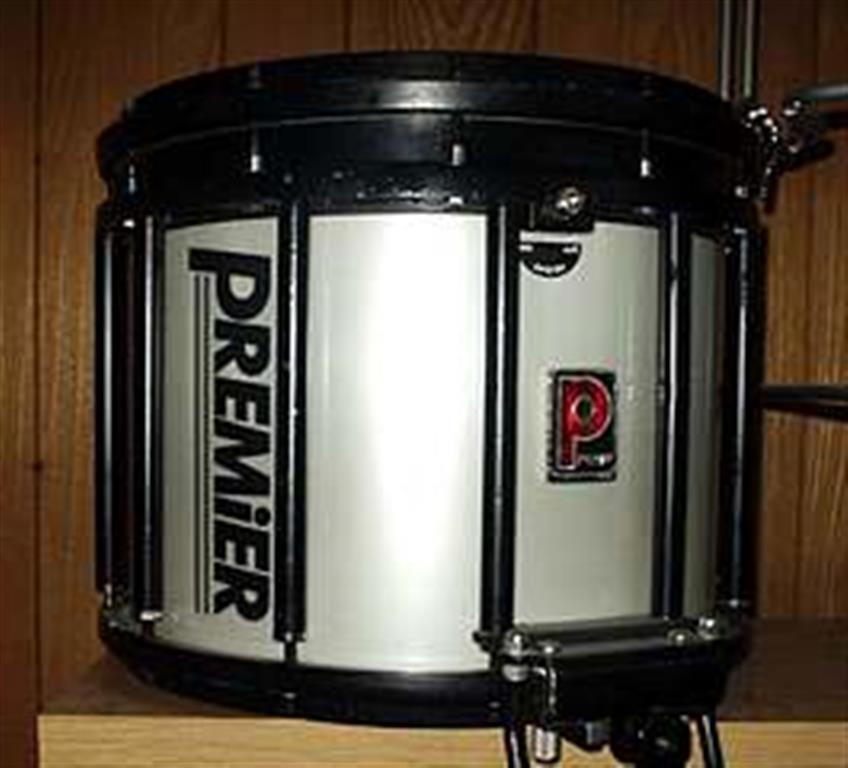 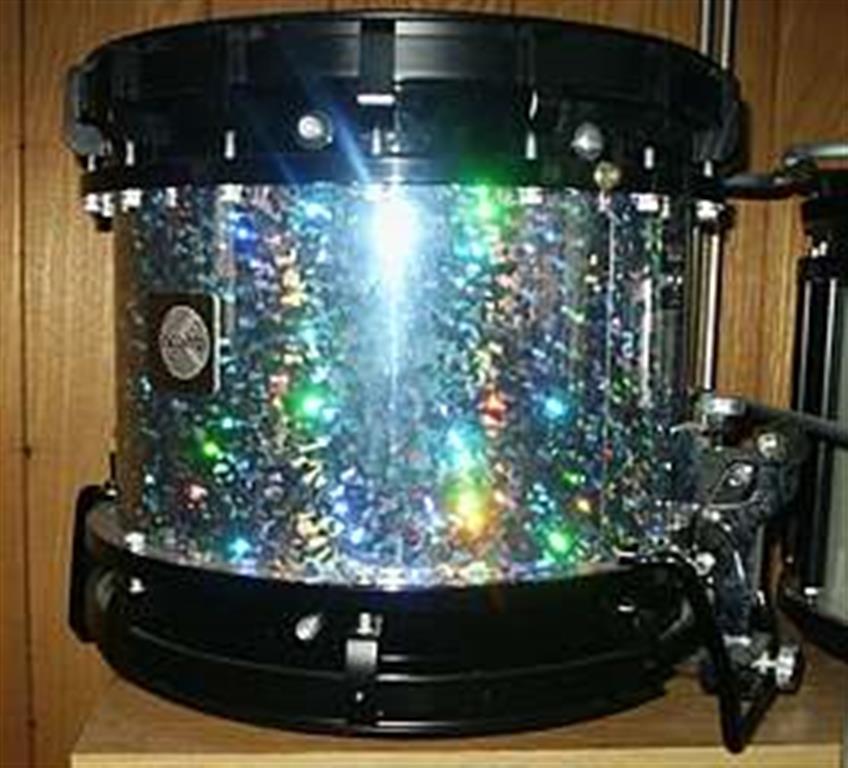 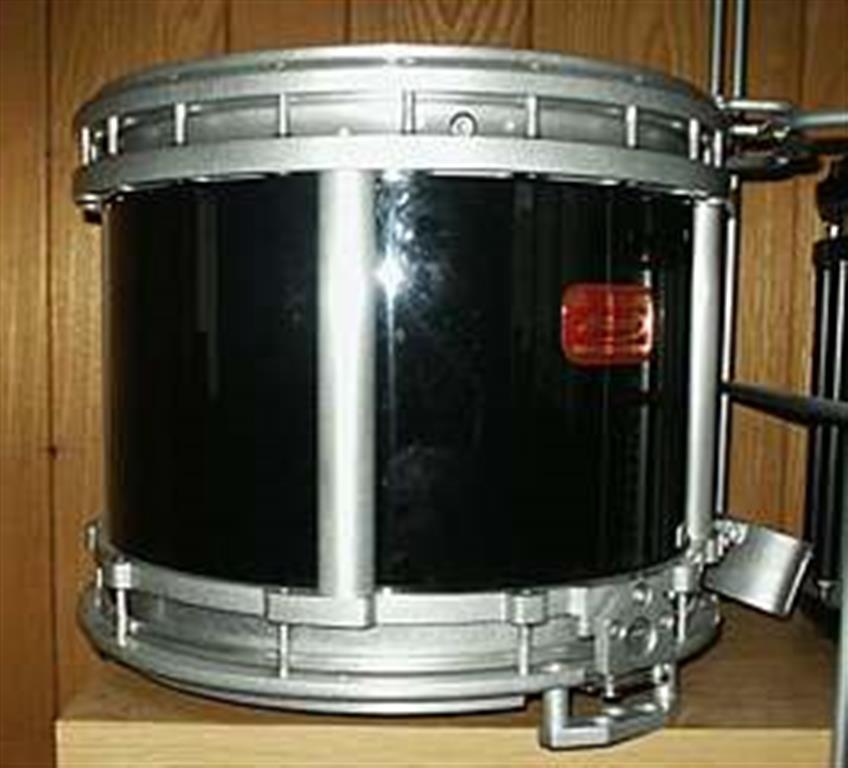